Nanaimo’s official unemployment rate of 12.3 percent is one of the highest in the province. But anyone who wants to attend the 2-day summit to tell Clark what they think about that will have to pay $275 to get in the door. Or have a lot of lung power…

About two dozen camp supporters stood outside the conference centre chanting up at the second floor windows where Clark was addressing the summit. They chanted that the Occupy Nanaimo camp was feeding and sheltering the homeless, and they asked what Christy Clark was doing for the homeless.

They also chanted for Christy Clark to come out and speak with them. But that had not occurred when I left at 4:30 pm. 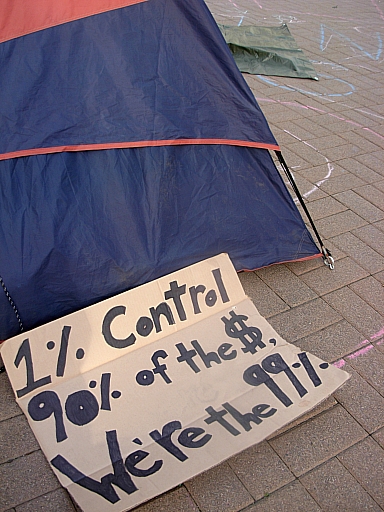 The Occupy Nanaimo camp is bigger and better provisioned every time I drop by. As of this afternoon there were 24 tents there, but more tents are URGENTLY NEEDED because the camp is growing daily.

Forty people spent the night at the camp last night, and more are expected tonight.

ITEMS MOST NEEDED AT THE CAMP RIGHT NOW:  Tents, blankets, sleeping mats, cots, foamies, air mattresses. Many people have nothing but cardboard to shield them from the cold concrete beneath the tents.

In yesterday’s headlines, Vancouver Mayor Gregor Robertson said that as far as he is concerned the Occupy Vancouver camp can remain indefinitely because it is addressing important worldwide issues.

Occupy Nanaimo continues to have the support and good will of the City (which installed the porta-potties yesterday) and the RCMP. I spoke to one business owner on Commercial Street today who said she has no problem with the camp being there, and she hasn’t heard of anyone complaining about it. Another nearby business owner even offered his store’s WiFi connection to the campers for as long as they remain.

Kim Goldberg is an award-winning poet and journalist and the author of 7 books. Latest titles: UNDETECTABLE (her Hep C journey in haibun), RED ZONE (poems of homelessness) and RIDE BACKWARDS ON DRAGON: a poet's journey through Liuhebafa. She lives in Nanaimo, BC. Contact: goldberg@ncf.ca
View all posts by Kim Goldberg →
This entry was posted in Events, News, Politics and tagged Christy Clark, economic equality, homelessness, Kim Goldberg, Occupy Nanaimo, Occupy Vancouver, Vancouver Island. Bookmark the permalink.