We had a smashingly successful launch of our latest Poem Gallery last Sunday, April 15, at the Nanaimo Harbourfront Library. 39 local poets contributed more than 60 poems to this year’s Poem gallery. And 18 of those poets were on hand at the Sunday launch party to read their work on display.

I emceed the whole thing, as usual. And I managed to snap a few pics along the way. The only drawback to emceeing is that by the time the readings were over, all the cookies were too!

Harbourfront Library Poem Gallery can be viewed on the library’s panoramic window facing out onto Diana Krall Plaza. The display is double-sided, so you need to stand both inside and outside the window to read all the poems.

The Poem Gallery is changed every April during National Poetry Month. If you live within the Vancouver Island Regional Library System, and if you would like to submit 1 or 2 SHORT poems for consideration for next year’s Poem Gallery, email them as a Word document to Anthony Martin at amartin@virl.bc.ca

Here is the complete list of poets featured in the current Poem Gallery: 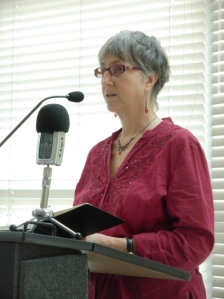 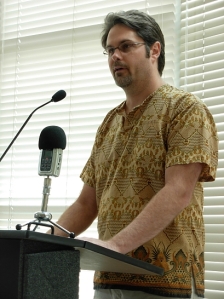 Kim Goldberg is an award-winning poet and journalist and the author of 7 books. Latest titles: UNDETECTABLE (her Hep C journey in haibun), RED ZONE (poems of homelessness) and RIDE BACKWARDS ON DRAGON: a poet's journey through Liuhebafa. She lives in Nanaimo, BC. Contact: goldberg@ncf.ca
View all posts by Kim Goldberg →
This entry was posted in Events, Poetry and tagged literary arts, Nanaimo, Nanaimo Harbourfront Library, Poem Gallery, poetry as skin of the city, poets, Vancouver Island. Bookmark the permalink.