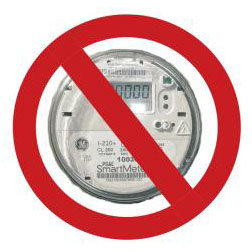 Apparently British Columbians can’t count on a future NDP government to respect democratic process and the will of the people where smart meters are concerned. And Una St. Clair of Citizens for Safe Technology is doing something about that.

Earlier this month, in a long interview with Bill Good on CKNW radio, BC NDP leader Adrian Dix told Good: We’re likely stuck with smart meters, largely because about a billion dollars has been spent on the initiative. (See North Shore News article for full story on the Dix interview.)

Unacceptable, says Una St. Clair – the Executive Director of Citizens for Safe Technology. St. Clair says the NDP will lose the support of tens of thousands of voters if the party won’t commit to implementing a full moratorium on smart meters, a full public hearing on the smart meter program (bypassed by the BC Liberals), and a guaranteed opt-out system with no additional fees for customers and regions choosing to opt out.

Earlier this week, St. Clair fired off the following letter to Dix and NDP Energy Critic John Horgan. (As you may recall, Horgan is the New Democrat MLA who, back in November, presented a ‘No Smart Meters’ petition to Legislature with 15,000 signatures.)

I represent 40,000 individuals on petition and 41 municipalities across BC, including Vancouver, Surrey, Langley and Victoria, who are all personally and collectively asking for a full moratorium, or at the very least NO FEE OPT OUT for Smart Meters.

Mr. Dix – your comment [on CKNW radio] clearly showed you have no intention of returning BC to a place of democracy and freedom, with true respect for civil, democratic and human rights. I am at the point of advising our membership that your leadership will result in the same travesties with regard to the Smart Meter Program as are being suffered under the rogue Liberals, and therefore, we must absolutely remove all support for the NDP leadership campaign.

If there is some confusion here, and the NDP is willing to commit to the words John Horgan has spoken time and again, implementing a full moratorium, a full public hearing, and guaranteed NO FEE OPT OUTS for individuals and regions that choose, please advise me at the earliest opportunity. Win or lose, our membership will not stand behind any political party that supports the smart meter program.

If we hear nothing from you, we will take the news report below at face value and advise our membership accordingly. We are willing to meet with you personally and discuss this matter further.

Kim Goldberg is an award-winning poet and journalist and the author of 7 books. Latest titles: UNDETECTABLE (her Hep C journey in haibun), RED ZONE (poems of homelessness) and RIDE BACKWARDS ON DRAGON: a poet's journey through Liuhebafa. She lives in Nanaimo, BC. Contact: goldberg@ncf.ca
View all posts by Kim Goldberg →
This entry was posted in Health, News, Politics and tagged Adrian Dix, BC Hydro, cancer, EMF, NDP, Privacy, Smart Meters. Bookmark the permalink.