Nanaimo Talk on Israel and Palestine 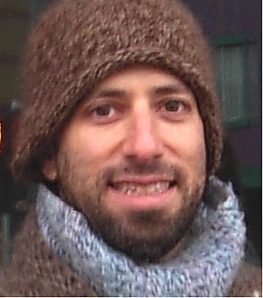 Nanaimo restaurateur Ilan Goldenblatt will give a public talk this Thursday, September 26, 2013, titled “Being Right vs. Being Effective: Thought-provoking ideas on moving towards resolving the Israeli-Palestinian conflict.”

Everyone is welcome to attend the 7:00 pm talk at St. Paul’s Parish Hall, 100 Chapel Street, in downtown Nanaimo.

Ilan was born and raised in Israel. After serving for 3½ years as an intelligence analyst in the Israeli armed forces, Ilan travelled in Canada and settled on Vancouver Island.

He was involved with Nanaimo’s Radio CHLY for three years as producer, board member and executive director until he opened The Thirsty Camel Café downtown in 2005. For the past two years he has also managed the Bowen Road Farmers’ Market.

Ilan visits Israel frequently and talks with friends and relatives about the conflict there. His most recent visit to Israel was earlier this month.

Kim Goldberg is a poet, journalist and the author of 8 books of poetry and nonfiction. Latest titles: DEVOLUTION (poems of ecopocalypse), UNDETECTABLE (her Hep C journey in haibun), RED ZONE (poems of homelessness) and RIDE BACKWARDS ON DRAGON: a poet's journey through Liuhebafa. She lives in Nanaimo, BC. Contact: goldberg@ncf.ca
View all posts by Kim Goldberg →
This entry was posted in Events, Politics and tagged Ilan Goldenblatt, Israel, Israeli Occupation, Middle East, Palestine, peace, The Thirsty Camel Cafe, Vancouver Island. Bookmark the permalink.