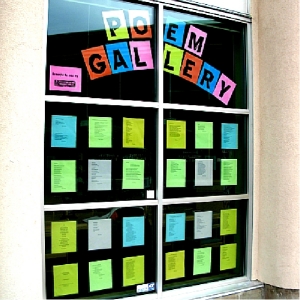 Join us on Sunday, April 6 (2014) at 1:00 pm for the launch and public readings for the latest round of poems on display in the Nanaimo Poem Gallery at Harbourfront Library, 90 Commercial Street.

The theme of the new Poem Gallery is “CHANGE”.

The following 37 poets from Vancouver Island and the Gulf Island have contributed 56 poems about change to this year’s Poem Gallery:

Many of these 37 poets will be on hand on April 6 to read their poems.

The Nanaimo Poem Gallery has been going since 2008, when I created the first one in an empty storefront window in downtown Nanaimo. It has since become a permanent feature of the Harbourfront Library, and the poems on display are changed every year during National Poetry Month.

Everyone is welcome to attend this free event. Juice and cookes will be served.