I’m back home in Nanaimo after my fabulous 6-day getaway to Seattle for the Second Cascadia Poetry Festival. And we are already planning Cascadia 3 for next year in Nanaimo! So save the date (April 30-May 3, 2015), and keep checking the festival website for more info as we pull together the program schedule: http://cascadiapoetryfestival.org

Cascadia 2 was dense with poets, poetry, beer slam, afterparty, small press fair, open readings, feminist readings, and much thought-provoking discussion with panels on everything from GeoActivism and Bioregionalism, to Online Teaching and Innovative Poetics.

Events were divided between Seattle University and the Spring Street Center, located four blocks away. I was one of the lucky ones who got to sleep right on site at the Spring Street Center along with fellow Cascadia II attendees George Stanley Joanne Kyger, Heidi Greco, and Joanne Arnott. And that was great since it meant I didn’t have far to go between the late-night festivities and my bed. We also had some interesting conversations around the breakfast table each morning.

There would be no Cascadia Poetry Festival without the vision of Seattle poet Paul Nelson. Thank you Paul! Your whole team of organizers and volunteers was fantastic!

I travelled down aboard the Victoria Clipper (which we dubbed the Poets Cruise) with some of the BC gang: David Fraser, Linda Crosfield, Ursula Vaira, and Gordon May. 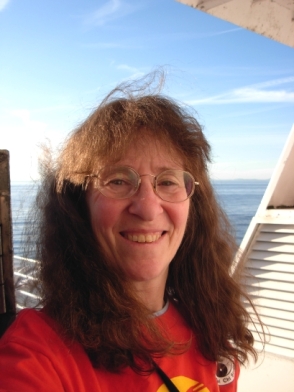 And I found time to do a little Seattle sightseeing…

…before the Festival began in earnest on Thursday night with a launch of the Force Field anthology of 77 BC women poets, at which I read along with Heidi Greco, Joanne Arnott, Ursula Vaira, Yvonne Blomer, and two other Canadian women poets who made the journey down: Joanna Lilley and Linda Crosfield.

All of the panels and readings and performances were great. But the highlight for me was the panel on Cascadian Poetics: Innovations from Here, with panelists George Stanley, Joanne Kyger, Stephen Collis, and Jeanne Heuving, and moderated by Nadine Maestas. This discussion absolutely turned my own notion about poetic innovation on its head. It revolutionized my thinking about what is truly innovative today.

The Innovative Poetics panel: Stephen Collis, Jeanne Heuving, George Stanley, Joanne Kyger… They were having a lot more fun than this photo would suggest – and so was the audience. (Photo © Kim Goldberg)

Vancouver poet George Stanley made the point that, in order to define poetic innovation, we must first define what the current poetic norm or values are so that we can then identify what is being rebelled against by innovative poetry, and what appearance that rebellion might have. George advanced the notion that much contemporary poetry has a certain ironic stance or voice in which the poet is not actually saying what she feels or believes, but rather is using irony to establish an attitude about something. George suggested that a rebellion against this trend of the ironic stance would be a poetry that is more realistic, sincere, honest, and direct in its tone and approach.

And here I had been thinking of “innovative poetry” as being what we commonly call experimental poetry – especially poetry that experiments with the assembly of language into sense/non-sense/altered sense.

Each day of the festival included an open and democratic component called The Living Room, where anyone could come and join the circle and share a poem. And that is a tradition we will be keeping alive when we mount Cascadia III in Nanaimo next year. 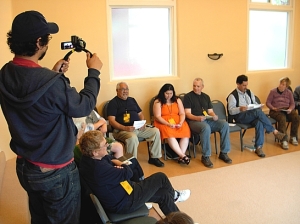 The Living Room – a free, open, and democratic space for sharing your poetry with others at the festival (Photo © Kim Goldberg) 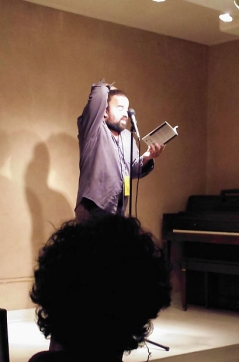 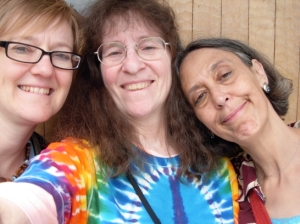 Here is the full gallery of my festival photos (and a few taken by other folks, as noted in the caption). Click on any image to enlarge it to full screen, and then scroll through the gallery one photo at a time.

Small Press Bookfair ran throughout the Festival at Seattle U. (Photo by Cascadia Poetry Festival) 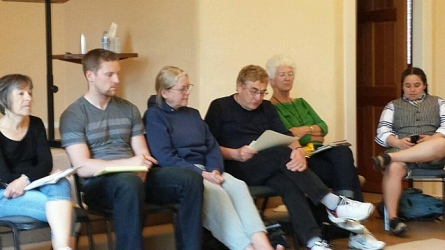 David Fraser shares a poem at the Living Room. (Photo by Danika Dinsmore)

The crowd for the ForceField readings (Photo © Kim Goldberg)

The crowd for the ForceField readings. (Photo © Kim Goldberg) 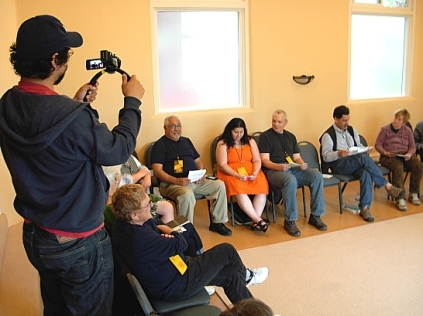 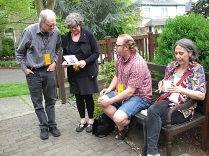 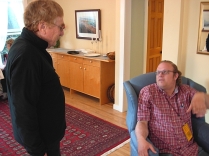 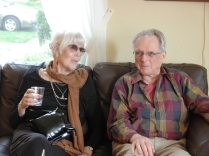 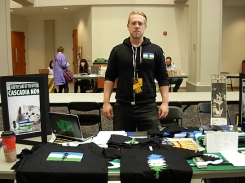 Brandon Letsinger with all kinds of swag at the Cascadia Now merch table in the Small Press Fair. (Photo © Kim Goldberg) 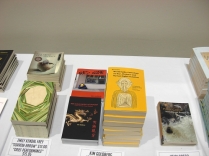 A couple of my titles, Red Zone & Ride Backwards on Dragon, for sale on the Seattle U bookstore table, alongside Kamesan’s World Anthology of Haiku on War, Violence, and Human Rights Violations, which I am honored to be included in. (Photo © Kim Goldberg) 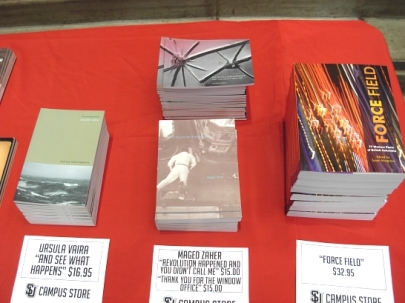 Kim Goldberg (Yours Truly) rocking the Cascadia T-shirt alongside David McCloskey, the “Father of Cascadia” and the maker of the phenomenal map of the Cascadia bioregion. (Photo by Heidi Greco)

Heidi Greco explores the Seattle U book table at the Small Press Fair. Seattle U Campus Store did a phenomenal job of ordering books of all the Festival poets to have them available for sale during the fest. Thank you William Cannon! (Photo © Kim Goldberg) 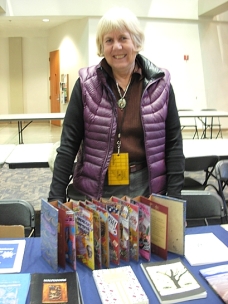 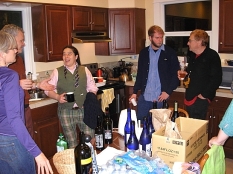 Kaia Sand at the GeoActivism panel (Photo by Danika Dinsmore) 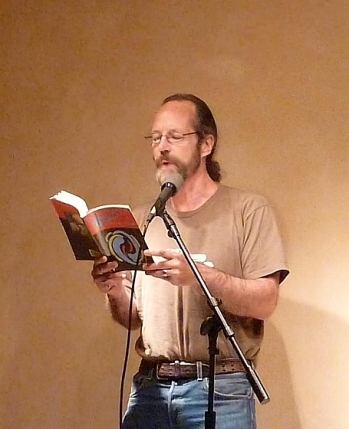 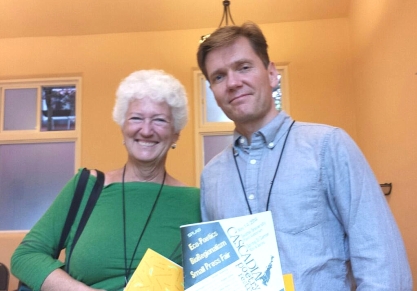 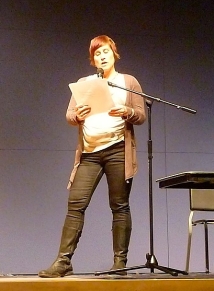 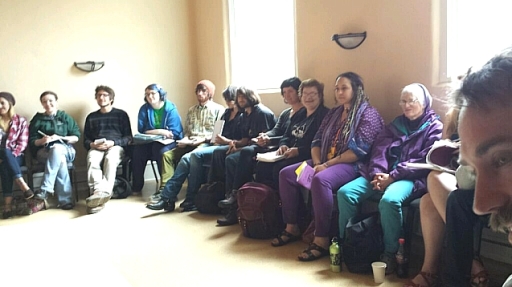 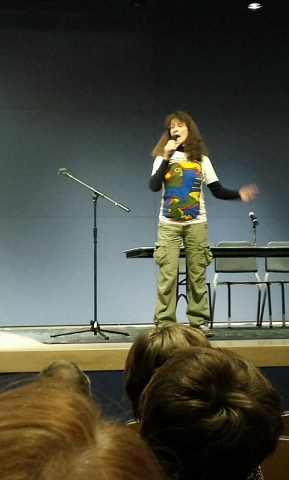 Sarah Brickman at the AfterParty (photo by Danika Dinsmore)

Kim Goldberg is a poet, journalist and the author of 8 books of poetry and nonfiction. Latest titles: DEVOLUTION (poems of ecopocalypse), UNDETECTABLE (her Hep C journey in haibun), RED ZONE (poems of homelessness) and RIDE BACKWARDS ON DRAGON: a poet's journey through Liuhebafa. She lives in Nanaimo, BC. Contact: goldberg@ncf.ca
View all posts by Kim Goldberg →
This entry was posted in Books, Events, Poetry and tagged bioregionalism, Cascadia, Cascadia Poetry Festival, George Stanley, innovative poetry, Paul Nelson, photography, Seattle. Bookmark the permalink.