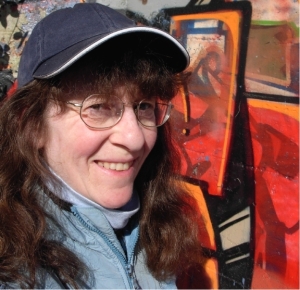 Hi! I’m Kim Goldberg, and Pig Squash Press is my alter ego housing most of my current creative output. I live in Nanaimo, British Columbia, and have supported myself from my writing and photography my entire adult life. Until recently, my work consisted mainly of investigative reporting and nonfiction books on environment, media, politics, social justice and other topical issues.

tumbled down a deep dark well of Taoist metaphysics and the arcane martial art of Liuhebafa. No words landed on the page for eight years. When the words did finally return in 2005, they came as poems — something I had never written before, nor ever imagined myself writing. I documented my journey into and out of silence in my book Ride Backwards on Dragon: a poet’s journey through Liuhebafa. It is a series of 66 poems (plus endnotes) patterned after the 66 moves in the main form of Liuhebafa. The book was published in 2007 by Leaf Press, and re-issued in 2011 by Pig Squash Press. In 2008, it was shortlisted for Canada’s Gerald Lampert Memorial Award for poetry. Visit my Liuhebafagirl site for more information on this book and my journey.

I also launched my own publishing imprint in 2007: Pig Squash Press. Initially, Pig Squash Press was the home for my many handbuilt book-art creations. I have made book objects out of roofing tarpaper, flooring paper, grocery bags, tree bark and whatever other odds and ends I find lying around downtown Nanaimo.

Pig Squash Press expanded into the realm of trade books with the Fall 2009 release of RED ZONE — my poems, photographs and artist projects documenting homelessness and urban decay in downtown Nanaimo, and by extension all our cities. RED ZONE sold out its initial print run and went into a second printing after just seven weeks. The book has now been taught as a literature course text at Vancouver Island University and elsewhere. Critics have compared the writing in RED ZONE to the work of Allen Ginsberg, Marge Piercy and John Steinbeck.

My previous five books were published by established trade book publishers: Harbour Publishing, New Star Books and Leaf Press. Many people have asked me why I self-published RED ZONE when I have a track record with established publishers (as though self-producing one’s work is some sort of consolation prize). The answer is simple: I wanted total artistic control.

All Pig Squash Press trade books are printed on 100% recycled paper at Printorium Bookworks in Victoria, BC. No trees have been murdered for my art.

People have also asked me about the story behind the name “Pig Squash Press.” It popped into my head on the eve of Chinese New Year (Lunar New Year) in 2007 as we were about to enter The Year of The Pig — a very auspicious year in the Chinese astrological system, promising great abundance.

And “Squash” was the schoolyard nickname of a close friend who has functioned as my creative Muse since my awakening into the Mind of Poetry (whether he likes it or not… we don’t pick our Muses, they pick us). I dedicated Ride Backwards on Dragon to him for this reason. The fact that he was born Year of the Pig was a further bonus. The omens are everywhere… Our only job is to recognize them.