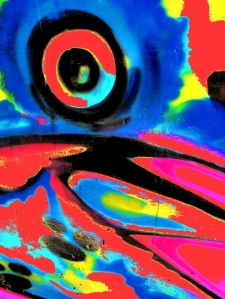 If the rumour mill can be trusted (and I assure you in this case, it can) the Covert Poverts—Nanaimo’s ever-changing troupe of off-kilter and unfed poets—is set to make another one of their famous guerrilla poetry strikes on Tuesday, March 11, at 1:00 pm. And the scruffy spot of real estate you want to be heading for to catch this word smackdown is the Pearson Bridge underpass, accessed from Maffeo Sutton Park on the Nanaimo waterfront.

March 11, 2014 is the third anniversary of the disastrous meltdowns at Fukushima Daiichi Nuclear Power Station.

Local poets Kim Clark, Darryl Knowles, and Kim Goldberg will be slamming down some rhymes and lines in a polyphonic word-feast to create a poetic representation of the chaos and unbridled energy of nuclear reactors running amok. The two linked pieces the trio will perform are “Reactor One” and “Reactor Two”.

The performance will be followed by an open mic (minus the microphone) for any members of the audience who want to share a Fukushima-inspired poem of their own.

The Pearson Bridge underpass lies beside Nanaimo’s Millstone River, which is home to an annual salmon run each fall. Pacific salmon, along with the rest of the marine ecosystem, are now at risk of heightened radioactive contamination because of the Fukushima disaster.

In California, a Fukushima Poetry anthology is forthcoming from the Fukushima Response Bay Area in collaboration with the Berkeley Fellowship of Unitarian Universalists. The work of your three Covert Poverts on March 11 will be included in that anthology.

Nanaimo’s Covert Poverts (whose members change at whim) deliver experiments in polyphonic poetry in an assortment of back-alleys, underpasses, and railroad crossings. Their heat-seeking lyrics are utterly unsanctioned, unauthorized, unapproved and disavowed by all Crumbling Institutions of Faux Authority.

Covert Poverts do it on the down-low, where it’s least expected, and advertised through back-channels and cyberspace only. Like Flash Mobs, but with poetry. By the time the cops come, we’ll be outta there. So grab your brain and a pair of ears, and c’mon down.